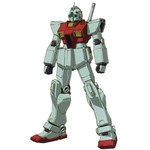 The main mecha of the last /m/ thing you watched has been replaced by a GM. How fucked is everyone?

Wouldn't change a thing. Heero will still be shot down like a bitch in the first episode. He'll still need Duo to fish his GM out for him. He'll still blow it up like a tryhard emo and his duel with Zechs will still be done with the Heavyarms instead of his original GM.

Only difference is that OZ now has to learn two names to shout before their deaths and occasionally scream, "IT'S THE GIIII-EEEMMMM!"